The bay is flat; the ocean casts 12 inch breakers on the sand. The sand is glistening light tan and fine. Robert Moses is one of the finest beaches in the world. 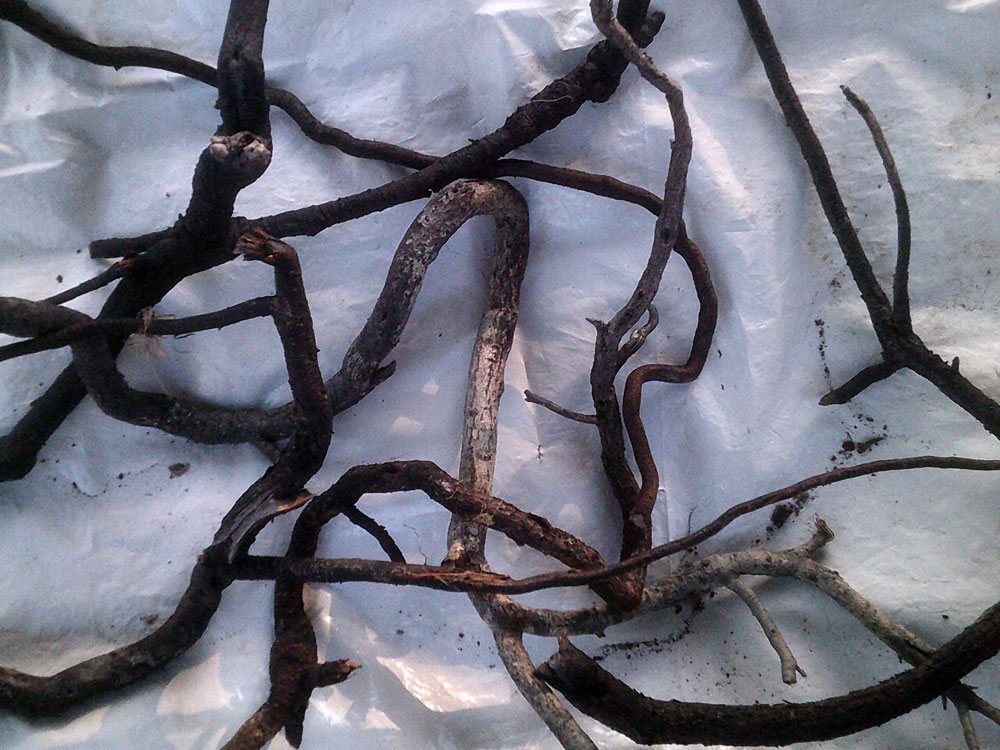 I walk east at the base of man-made dunes starting from field 5 and head toward Fire Island Lighthouse. Beach grass was planted to create a dune. It is working. I see row upon straight row of beach grass that look like soldiers standing fast against a storm. The sand is mounding.

As I walk, I find little coves where Astarte shells have been deposited by high flow over the mid beach almost to the base of the dunes. This is the over wash of spilling breakers. I make a discovery. Beach Plum branches are strewn here and there from Hurricane Marie.

The beach plum I found is a contorted scabby black branch. It stands out in contrast to ever exposed sand, smoothed from wind. It has a “U” turn trunk, a telltale sign of its struggle to survive and grow in this environment: Salt spray from breakers and whitecaps, lack of nutrients, and periods of drought. It has developed adaptations to deal with all three. Its leaves are waxy and thick; the roots plunge deep into the sand; nutrients deposit on the leaves from aerosols that are released into the air from crashing breakers. There are many elements that arise from breaking waves; manganese, magnesium, iodine, copper, calcium, iron and many more. The oceans are the pantry from beach plum shrubs.

Two days ago I visited to witness the big waves in the aftermath of Hurricane Marie. The breakers rose to five feel, approached the shore and tumbled. A burst of water gushed upward. The breaking wave trapped air which escaped creating a fine rumble and sight.

I collect beach plum branches along the way. I might have an art project. The lighthouse grows larger as I close in. With both hands full, I head back to the car on Burma Road.

I stopped at a patch of seaside goldenrod in bloom to watch a monarch and sulfur butterfly feed. I see tiny sweat bees speedily zigzagging among the flowers.

We head back to Babylon over two bridges which allow spectacular views of the Great South Bay. We experienced a silent, peaceful world where you can’t help but slow down. It has taken us away from the razzle-dazzle of the mainland. We proceed at 40MPH. many cars pass us at 80MPH. before we even reach Montauk Highway, we are back in the super fast pace of Long Island.

Notice o All 8 Digits – a poem