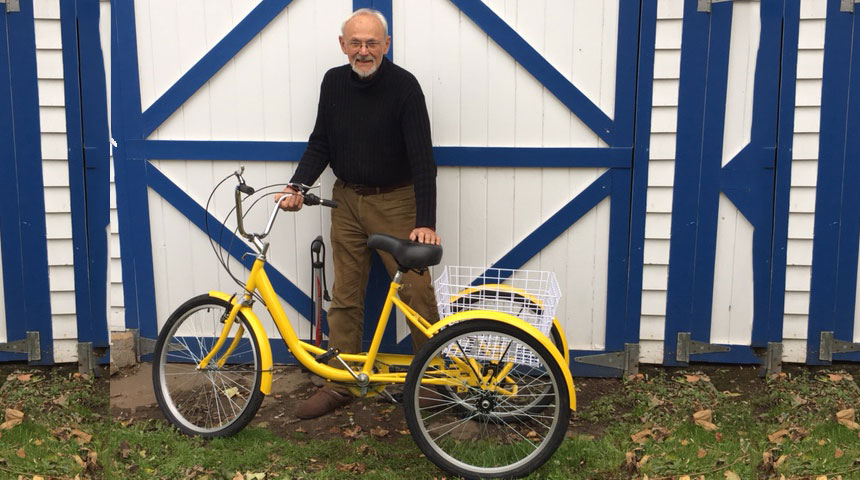 A Tricycle Built For One

I volunteered to put together his tricycle. He ordered it on the internet. It came in a big, heavy cardboard box. I opened the box and removed the parts. There were no instructions. Lucky for me I know a few things about bikes. I spread all 5- parts on the patio table and began.

It looked challenging, and that’s the way it turned out. I spent five hours swearing, dropping tools, getting charley horse in my fingers holding tiny screws, having to go to my tool chest to get more tools. I figured things out by making a lot of mistakes. High on the list was installing the derailleur. The bolt was small, slippery and round. I was in an awkward position. Both my hands were in odd positions. The bolt slipped and bounced away. I had attached it backwards and had to undo the bolt – 20 minutes, and another half hour to install it again. 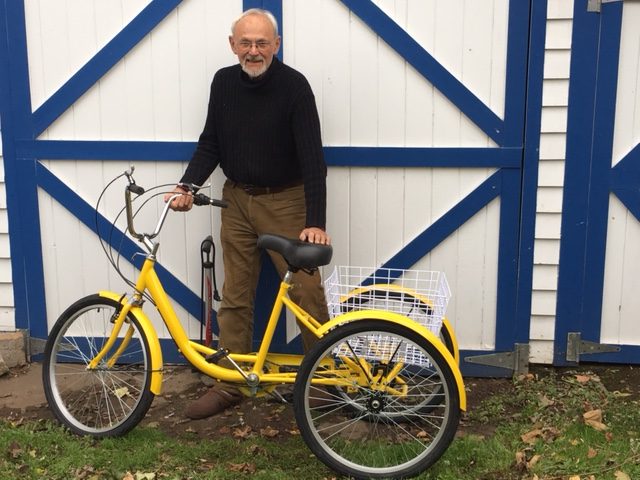 The chain arrangement baffled me so I turned my bike over and used it as a model. Bolting the fenders on was hard. Small places to make tools fit on, back strain, I gave up for the day. I put the fenders on before attaching the reflectors. I had to twist and turn fender, hands, and fingers to attach the tiny bolt.

The next morning I solved another problem, I had the handlebars on backwards. This is the way it goes when there are no instructions. I hate reading them anyways. It is good to make mistakes. I like trial and error and accomplish both with great verve and zeal. Who needs an instruction book anyways?

I’m doing this for a friend who said “I need more exercise so I bought a tricycle on the internet. Can you help me put it together.” Yes I said and dragged the box to the trunk of my car. By help he means me. We are friends and I saw the job as a challenge. I’m a hands on kind of guy. It turned out to be Mount Everest when I thought it was the small I used to sled down as a kid. Near the end of process, I found three tiny ½ inch tubes taped to the handle bars. I had no clue what they were for. I was so close to delivering the bike by test riding to his house which is only a few blocks away. I decided to take another break.

I have to do this myself and not rely on help from the bike shop only 200 feet away. How would it look for me to bring them a tricycle my friend bought on the internet, with no instruction booklet?

As I worked, my admiration grew for the inventors of bicycles. There are lots of parts, each especially designed to fit together. Constructing this tricycle gave me a close up view of the engineering marvel that bicycles are. Looking at his near-finished,  yellow bike with large basket on the stern, I have a new respect for bike repair, bikes, inventors of bikes, and riders of bikes. I hope my friend will use it to exercise. He is 10 years older than I and I’m 78. My mother never had an instruction booklet for me and I turned out OK.

From the very beginning, I suspected that there was one lost nut needed to attach the front fender to the handlebar post. I rummaged through my hardware collection and found a nut and new bolt to finish the job. A day later, when I was removing my pants, a nut fell on the floor. It was the missing nut. It had fallen into my cuff.  I decided to save this little silver nut as a testament to the spiral of working without an instruction book.

The upshot extent in this story was when I tried to tighten the cable that is attached to the derailleur.  I dropped the nut into the grass. I searched for 15 minutes and found it. I tried again to attach the nut. I could only use a finger because the location is small. Just as I felt the nut begin to screw into the bolt, I released the derailleur and it catapulted the tiny bolt into the shrubbery. I searched for 20 minutes. It was time to take another day-long break.

I rolled the bike over to the bike shop with two remaining parts I had no clue where they fit. Ron, the dealer showed me both. I left the bike with him for final adjustments of brake and deraulleur.

The time had finally arrived.

The bike shop “reassembled” the bike. This means that me, the assembler, did not assemble correctly. After all, I was flying by the seat of my pants with no instruction book. I asked them to check the brakes and gears which they did. But, they found things I did that were wrong. The bike works.

I rode the bike over to Darrel’s house. He sat on the seat and it slipped down. With no allen wrench or pliers,  we will have to give it another go tomorrow…with no instruction book.

“Stillness Against the Backdrop of Steady, Intensifying Change”