Review of a Simple Blues With a Few Intangibles 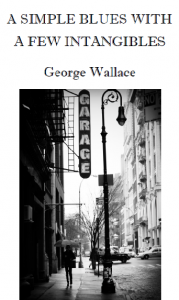 George Wallace writes poems from the sweat lodge of experience. Within his poetry, he chants and serves up incantations. The Jack Kerouac beat/Bebop has infiltrated every neuron of his brain.

He chants in A SIMPLE BLUES WITH A FEW INTANGABLES with well-placed repetition as in “all night long and old chords and no chords.” His frequent repetition moves the poems along. They are fun to read and to listen to.

In OCTOBER RUNS LIKE A BE-BOP SHAKESPEARE more chants…”Let’s go spittle to mole, mole to molecule, man to man, cloud to toe and back again.” Here is a food web with words that feed on each other. Now George is on a vision quest leaving the city to go “upcountry.”

SOMEWHERE OUTSIDE THE BLISS takes us to southwestern New York for his rant on Native American history. The Senica Nations loss of reservation land is his chance to sing incantations of lament. He uses the letter “C” skillfully as in “they painted us into a corner and called it Cattaragus,” and continues with circles and calico. Fresh language is everywhere…”When they talk, its office machines and when they talk it is waterfalls.”

PASO A PASO treats us to the USA/Mexico border crossings and concludes with incantations of the plight of the people…”Their solemn processional”…is a sort of powwow circle dance. He emphasizes  “converging”, the assimilation of “them” with us. In the native tradition, word its “HO”, I hear you.

Wallaces voice is unmistakable. Reading his poems, I hear him reading. He builds in various paces, tones, and volumes. Good stuff.

How To Make a Fish Print