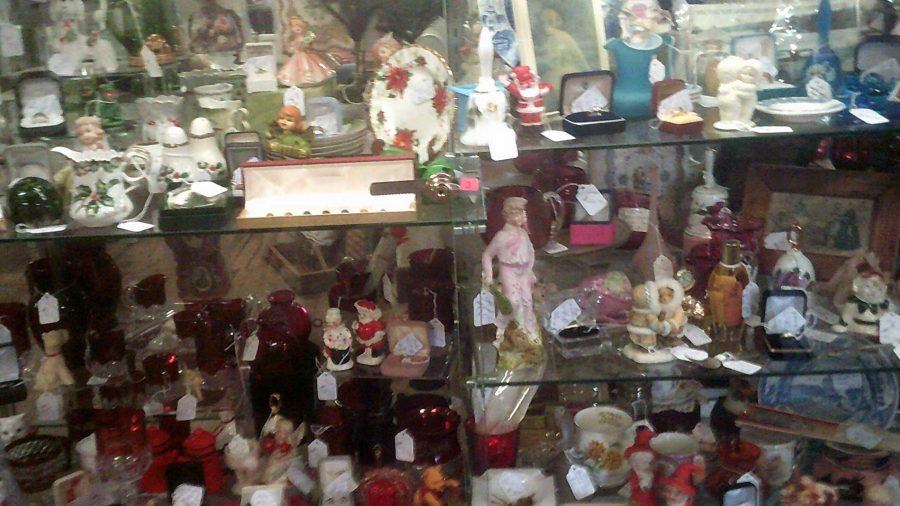 We visited a huge mill operation in Lewisburg, Pennsylvania. It was turned into an antique business with 350 consignment booths. As my wife went happily on her way, I stumbled from booth to booth, overwhelmed by the sheer volume of material. I began out trying to be mindful of item after item.  I began gulping whole booths with occasional stops to actually look at a few items like a old pair of wood skis. I remember how I used a pair to ski down the slide in Como County Park. 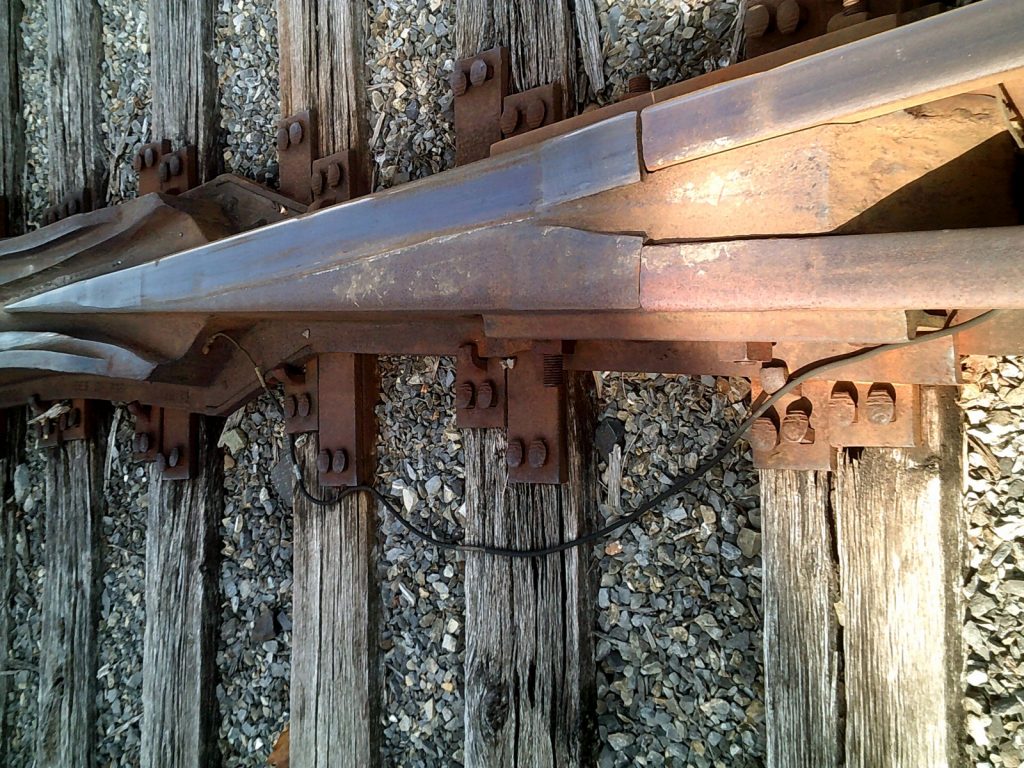 I decided to escape and walk around the building and take pictures of anything simple and uncluttered. I came to railroad tracks and started shooting. Long iron rails, their shadows and the power of iron rust running perspective.

We only had 45 minutes to tour the museum because of the parking meter. I headed for the photography exhibit. My goal was to find a few pieces that I could use as examples for Ekstraphtic experiences. I found four.

I marveled at a Bentley snowflake. It invited me to look close. The detail and sharpness of a single crystal considering the primitive equipment he used to photograph this object is amazing. I love simple artistic things with clear or no background and exquisite detail. I once was in a total whiteout.

I could not determine my direction. As a youth, I grew up in the snow belt of Buffalo, New York. I’ve skied, snowshoed, shoveled, and hiked in snow. Bentley simplified all my experiences into one, simple flake. Basic and simple, the snowflake ended up in a respected museum on the campus of an Ivy League school.

A stopped to admire Vassily Kandinsky’s small painting. The painting has zig’s and zags, circles and other shapes of various colors and moods. For me, it conveys confusion, chaos, disorganization, and yet coherence. It starts me remembering some of my collages which are filled with various pieces of shape and color.

I was drawn to an Edward Curtis photo of an indigenous man. His face, sepia toned, of his old, wrinkled face was taken in 1875. Curtis took pictures of Indians like this knowing that this culture was in transition. His foresight and dedication astounds me.

Howard Russel Butler’s paintings of total solar eclipses were made in the 1930’s Butler, a professor at Princeton was an eclipse chaser. He’s make quick sketches during totality and make paintings later in his studio. Other astronomers used his work for research before today’s technology. The Capturing Transient Effects exhibit is a great example of the science/art connection. The edges are softer than today’s photographs.

I looked up at the summit of the ridge of the Appalachian Mountains on the Delaware River. Bent rock layers and scree perched high above. The sight comes out of route 80 and forests on both sides and suddenly, the forest opens into a spectacular sight. Eons ago, the Delaware River broke through to take the path of least resistance. It is a huge right angle bend through a looming gap of rock. I was looking at the result of continental drift when Africa pushed into North American creating the Appalachian mountain chain.

Once we entered in Pennsylvania, the landscape changes. There are red sandstone cuts, rolling farmscapes, towering clouds that filled the sky, and 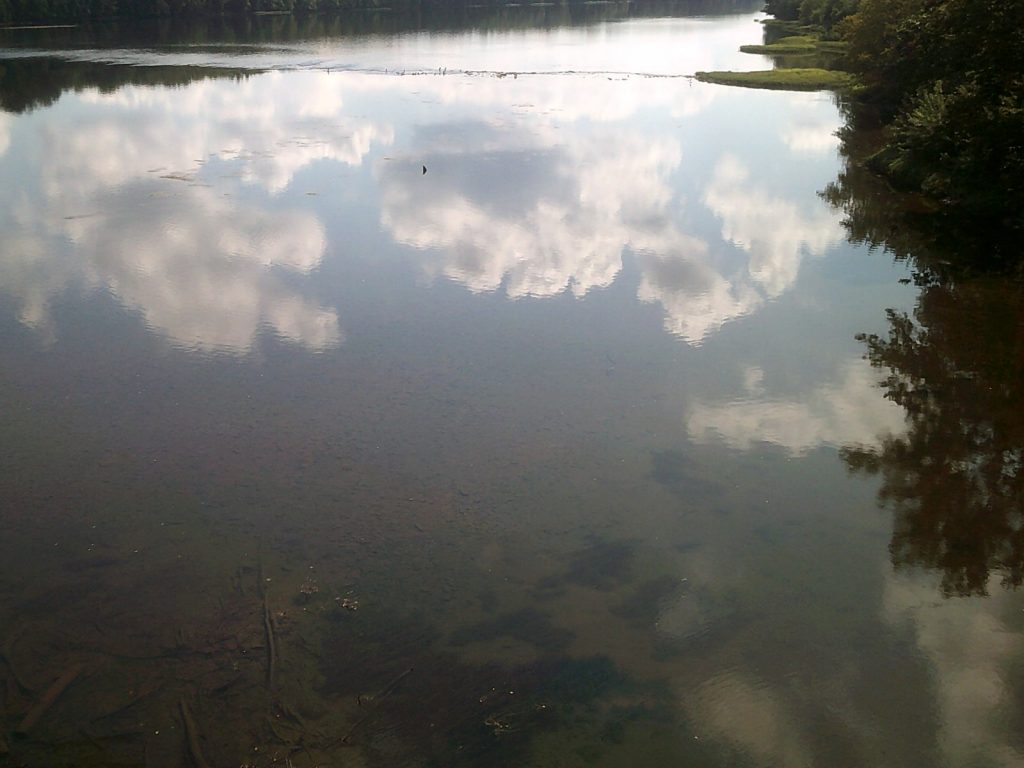 The Susquehanna River. We stopped in Lewisburg to view the river from the middle of a bridge. The water level was low, the water reflected clouds and forest. Nancy spotted a large carp directly below. I thought of all the creeks and brooks, and rivers that collected this water from upstate central New York and how the water is destined for the Chesapeake Bay. I imagined Mark Twain on his raft on the Mississippi River.

On the Bucknell campus, Nancy and I attend a memorial for Jack Wheatcroft,  a beloved English professor. Nancy attended three of his classes. The memorial was unusual. We assembled in the main hall of the Poetry building and listened to three poems and a Bach Fugue. There were no speeches. Then we assembled around Jacks Popular, a tree planted in his name. 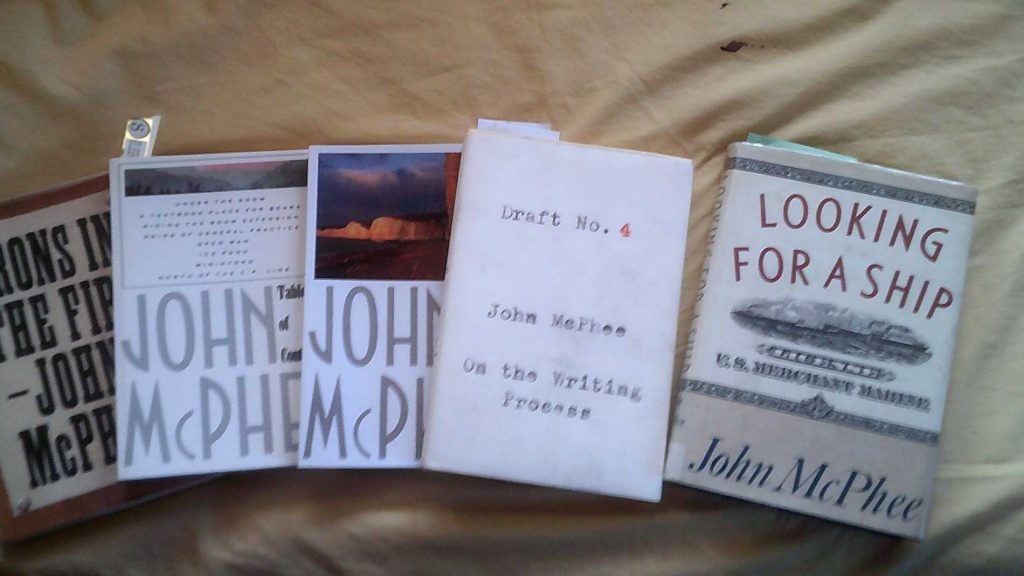 College town bookstores are always worth visiting. Nancy wanted to browse the poetry section. I wanted to check out the non-fiction section. I asked the woman behind the cash register “ Where is the John McPhee section. She led me right to it. He occupied a whole shelf. I am a huge fan. He is considered the father of creative non- fiction.  He was born in Princeton, educated in Princeton, and teaches there. He has written 39 books. I wanted his latest “Draft #4” I read a review in the New York Times and bought that book and two others.  Many of his essays were first published in the New Yorker.

I marvel at his prose. He is the master of interesting details and stories. He knows how to find subjects and deeply investigate them.

I am not a speed reader, but when I read McPhee, I am. I write non- fiction essays Myself. Facts pour out like a Delaware River at flood stage. His paragraphs are often lengthy. It’s like listening to a nonstop talker. To say McPhee has done his homework is an understatement. He is a reporter who turns over every single rock digging deeper and deeper. This keeps me interested from start to finish. He accumulates notes and frequently hangs out with his subjects. He accumulates much more than ends up on his pages. Yes, as you might have guessed, I am a McPhee addict.