In order for visitors to experience Lakeland County Park, a series of boardwalks are necessary. This is because most of the park has a wetlands habitat. Elevated four feet above the ground, visitors have a grand opportunity to look down to see vegetation that required wet soil.

The maze of boardwalks is extensive. There are straight-aways, zig zags, and alcoves where one can sit. Touch-me-not or jewelweed is in full bloom in September. Dense stands of this plant are easy to spot. The orange blossom stands out against its green leaves. 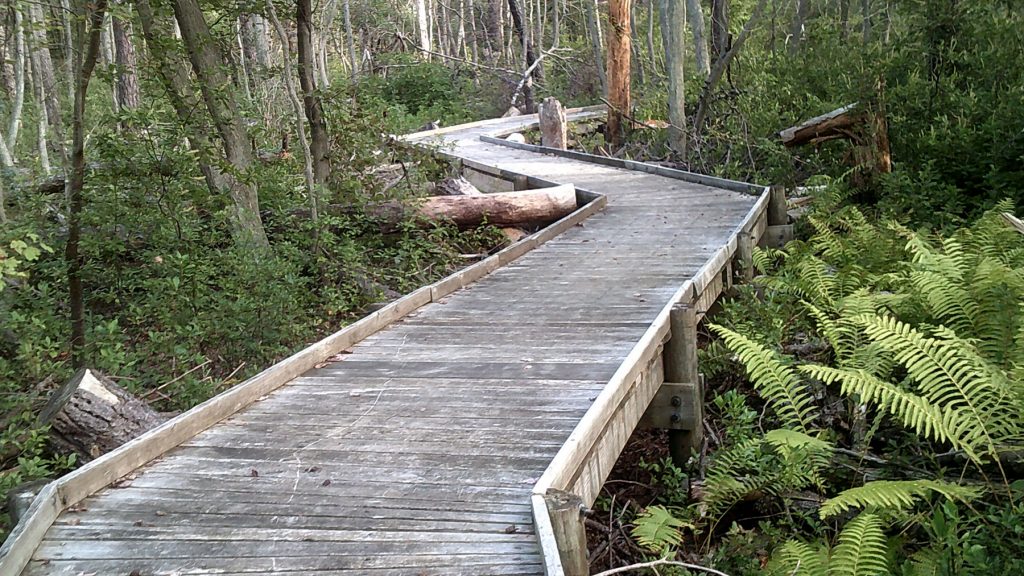 Signs attached to the railings say HONEYSUCKLE POND. When I saw the first of these signs, I hastened forward wanting to see it. The park preserves the headwaters of the Connequot River which is to the south across from Veterans Highway. The Ronkonkoma Moraine to the north supplies the groundwater which emerges in Lakeland. The name comes from Honeysuckle Pond which, when full, looks like a small lake.

I caught a glimpse of the pond from the boardwalk. “Where is the pond?” I wondered. Finally, I came to the edge of the pond. It was noth ing more than a puddle. It looked like pea soup. I suspect eutrophication. A housing development directly to the north might contribute phosphates and nitrogen wastes that surface in the pond. Two years of drought has lowered the pond level by several feet. Most of Honeysuckle Pond is presently grassland.

I noticed that it felt a bit cooler on the boardwalks than when I arrived in the parking lot. I’ll call it “wetland cool”. That is, cool as in temperature. Wetlands are lower than the surrounding areas. Cool air,   being heavier than warm air, settles in wetland areas. Ground water temperature averages 56 degrees F. thus the groundwater that emerges from the Ronkonkoma Moraine just to the north of the park comes out cool. This affects the temperature of the mark. I took the temperature an both parking lot and on the boardwalk. There was a 4 degree difference. So therefore, wetlands are cool in two ways.

The Greenbelt Trail goes through the park. I discovered white blazes on trees just after entering a boardwalk. I paused on the observation platform at the pond. Tupelo trees grow in wetlands. Their leaves are turning red. I watched three painted turtles basking in the sun. Three sources of noise followed me throughout the park…traffic on Veterans Highway, the center line of the Long Island Railroad. Aircraft also take away from the natural sounds that nature has to offer in this park.I had arrived at 8AM on a weekday. I met only three people during my visit. Mike, a seasonal employee of the Suffolk County Parks was on his way to post signs to protect the turtles. I learned that most of his work involved the Piping Plover at Smith’s Point County Park. Mike graduated from the Syracuse School of Forestry and wants to make his career with some facet of the environment. He showed me a map of the park. I found a circular trail that I’ll try on my next visit.

The southern boundary of the park parallels the Railroad tracks. I came to a concrete tunnel under the tracks that allows passage for Greenbelt Trail hikers. The concrete walls are completely graffiti covered. I intended to reach Veterans Highway and then turn back. The wetland habitat gave way to Pine Barrens forest. I turned back before I reached the highway.

There are other parks that have boardwalks. All of them give people the opportunity to get closer to sensitive wetlands. The county has kept Lakeland in excellent shape. One evidence of this are plastic bags stapled to places on the boardwalk with small “please don’t litter” signs. Patches of brown paint covering graffiti in a few places on the boardwalk railings. This is another clue that the county is proactive in protecting and enhancing the experiences of visitors.

Who Are These Savages?