I knew that there would be very few visitors at Gardiner County Park. It was drizzling, with gray skies, and cold. I set out to take photos and take a walk. This park is only one of two maritime forests along the edge of the south shore of any size.

A few steps south told me how this ecological habitat got its name. The trails off the beaten straightaway to the bay have roots spread out over the surface. The trees that live here had adapted to a water table that is only one to two feet below the surface. Red Maple and Tupelo are two of the major species. Because the roots spread out from the trees, they don’t have deep roots to help them withstand strong winds. Those that succumb to winds of 50 mph are toppled. They are called blow downs. I saw many. However, one blow down went only half way. As it fell, it got caught in the fork of a tree. 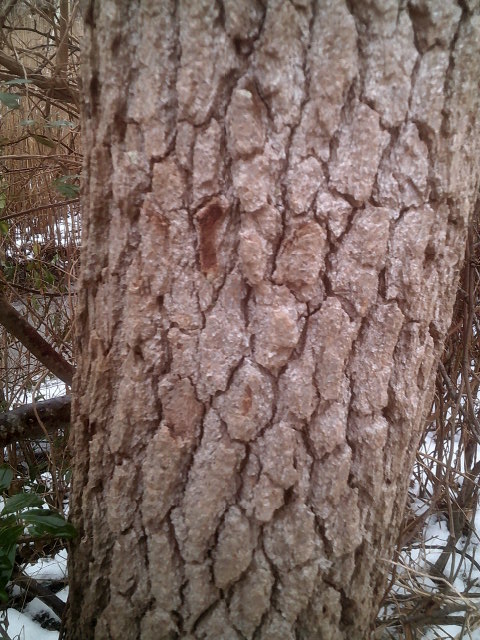 My favorite species of tree is the tupelo tree. It has a distinctive bark pattern. Its’ bark is divided into sections that remind me of alligator skin. Tupelo’s are adapted to wet soils. They have deeper roots that prevent them from toppling. The red fruit of this tree is prized by migrating birds.

Once I reached the bay, the icon structure is the Captree Causeway. When I looked that way, I saw a huge flotilla (raft) of ducks floating opposite True’s Creek. I estimate 10,000 birds. Why here? They are sea ducks and are resting from the rigors of flight in heavy off shore winds. 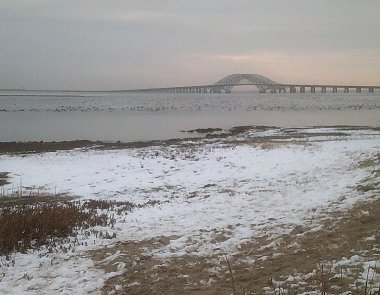 I turned east toward Thompson’s Creek. Signs of super storm Sandy were immediately evident. Exposed beach sand has been pushed back by strong waves far enough to cover the salt marsh behind. As I walked I found the dried stalks of seaside goldenrod and plenty of dog tracks.

The salt marsh is a marvel in and of itself. It is in sharp contrast to the forest behind it.It is always wet and floods with every high tide. For this reason, the marsh has a web of drainage ditches. The main ditch is 8 feet wide. Feeder ditches are 3 feet wide. I believe that these ditches were dug for grazing cattle and before that, to harvest salt hay. One old map I saw at Sagtikos Manor showed a ditch with a name…Terrapin Canal. That 100 year old map had other tell-tale historical facts that I will use to create a power point program of Gardner County Park.

Thompson Creek forms the eastern boundary of the park. The Thompsons Creek corridor has the most scenic views in the Park. The tree line on the east side frames the meanders, tall reed grasses, and sandy banks. I found myself taking many pictures here. From one viewpoint I had to stop for several minutes just to take in all the variety of textures and colors. If there was a registry of most beautiful scenery of Long Island, this would fall in the top ten.

I encountered may mundane little scenes that captured my attention: cinnamon and royal fern – their light brown patterns make them still easy to identify.

Along several of the paths, I felt an intimacy as tall reed grass formed a narrow corridor. 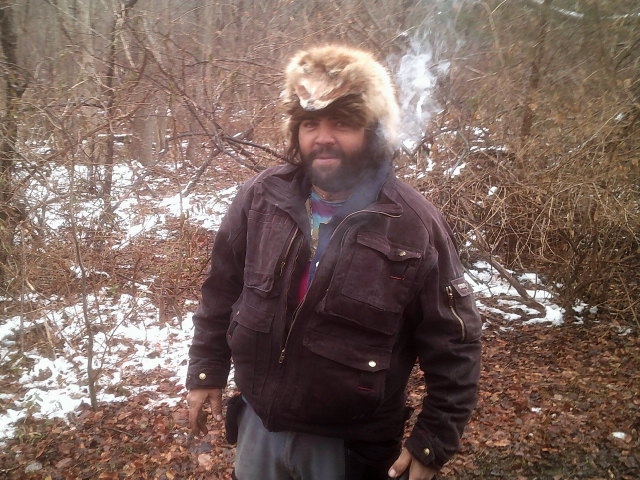 I encountered a friendly man smoking a cigar with his pit bull. I asked if I could take his picture. He was wearing a coonskin hat and clouds of smoke wafted behind him. This park is popular for people and their pet dogs. Fortunately for us, they mostly visit on fair weather days.

Nearing the end of the walk, I came across an elderberry bush. I broke off a branch to take home and sketch. There isn’t a walk that I’ve taken for almost 50 years that I haven’t seen something new and learned something new. There is only one reason for this. I have cultivated the skill of awareness. Without a smart cell phone, I have no interruptions and can focus my attention of my immediate place.